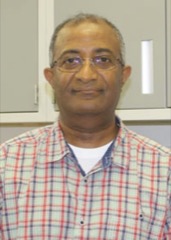 Congratulations! Dr. Kebrom and his colleagues received $200,000 research grant from the National Institute of Food and Agriculture (NIFA), United States Department of Agriculture (USDA), through the Agriculture and Food Research Initiative (AFRI) program for their research on the molecular physiology of plant shoot architecture and crop yield improvement.

Project Summary: Plant shoot architecture is one of the major factors that determine the yield of crops grown for food, feed, and biofuel feedstock. The number and position of shoot branches that develop from axillary buds determine the final shoot architecture. Shoot branches compete for resources such as water, light, and nutrients. Excessive shoot branching reduces the overall yield of crops such as wheat and the other major crops. Wheat is one of the major crops grown in the US and contributes 20% to global calorie consumption. To feed the growing world population and avoid dire food shortage in the coming decades, the yield of wheat should be improved. The long-term goals of Kebrom’s research is to advance knowledge of the physiological and molecular mechanisms controlling shoot branching and develop strategies for translating the knowledge into developing new crops with optimal shoot number and higher yield.

The optimal number of branches that maximizes the yield of wheat is unknown. Also, a method for developing wheat and other crops with the desired number of branches is not yet developed. A wheat plant produces up to 15 branches. However, most of the yield is contributed by up to four branches; the remaining branches are unproductive because they die before producing grains. These unproductive branches compete with productive shoots for light, nutrients, and water. The competition for resources weakens the growth and productivity of the productive shoots and reduces the overall yield. Kebrom and colleagues hypothesize that the highest yield could be obtained from a wheat plant with two to three productive and limited unproductive branches (also known as tillers). They are awarded the AFRI grant to test their hypothesis using the tiller inhibition (tin) mutant wheat. Stem internodes in tin start to elongate earlier than in normal (wild-type) plants. Stem internodes are strong competitors for sugars produced by the leaves and inhibit shoot branching indirectly by limiting sugar supply to growing branches. The early internode elongation in tin inhibits the growth of branches. The stem internodes in wheat grow after flowering. The first objective of their research is to control the timing of stem internode elongation in the tin plants indirectly by delaying flowering to sequentially increase the number of branches and investigating the effect on grain yield. And their second objective is to identify molecular mechanisms and genes controlling early stem internode development in tin using RNA sequencing and computational systems biology approaches.

The research will be conducted using the newly established plant growth chamber at the Cooperative Agricultural Research Center (CARC) in the College of Agricultural and Human Sciences and genomic DNA and RNA sequencing capabilities and computational tools established at the Chancellor’s Research Initiative (CRI) Center for Computational Systems Biology (CCSB) in the College of Engineering. At the end of the project period, they will submit proposals to the AFRI program for more grants to translate the new knowledge gained into developing new wheat varieties with an optimal number of branches and higher yields. The methods developed and genes identified in this project will be useful for any other crops. Therefore, they will continue fine-tuning the methods for other crops.