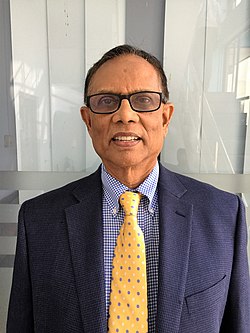 Society and funding agencies, both State and Private expect realistic outcomes from basic research programs to benefit human life. In the past, there are many instances where basic science knowledge converted to life-changing developments in the livelihood of all of us. However, the results of these conversions have become limited resulting in just publications and in better understanding of the science. The area of Translational Research crystalized in the field of medicine during the past few years, because of the urgent need to solutions to human ailments. In this presentation, Dr. Wijay examines the need to expand this initiative to benefit all aspects of human life and what systems need to be in place to facilitate such research programs so that the benefits to human is achieved much faster.

Vidya Jyothi, Dr. Bandula Wijay,the Ambassador for Science Technology and Innovation for Sri Lanka, Professor of Clinical Medicine Kotalawela Defense University and CEO of ProSum Inc./LeoMed LLC and BinLab, Inc, (a Houston, Texas based Medical Device development company) is one of the most eminent inventors of medical devices with more than 25 United States and international patents. He is a scientist, engineer and a serial entrepreneur who has developed a variety of interventional cardiovascular devices, such as balloon angioplasty, vascular stents, local drug therapy procedures, heart imaging devices and procedures and a whole host of other medical devices and concepts.

Since 1984, he founded four medical device companies, Poly-Tech, Leocor Inc., BinLab, Inc. and LeoMed LLC for research, development and manufacturing of cardiovascular devices. Dr. Wijay is the inventor of several key medical devices including the Protected Coronary Balloon Angioplasty (P-PTCA) concept for performing angioplasty in high-risk patients. He is also one of the pioneering inventors of one the present-day vascular stents, which are devices used in human coronary arteries to maintain the patency of arteries after balloon angioplasty. Stents based on his invention of the nested loop is now sold by Boston Scientific Corporation. His current research is focused in the area of stem cell harvesting as well as several surgical, minimally invasive, Ob-Gyn, aesthetic and plastic surgery devices. Prior to starting his own enterprise, Dr. Wijay held senior management positions at Baxter -American Hospital Supply Corporation and at Mallinckrodt Corporation from 1978 to 1984. In 1984 he founded Poly-Tech and Leocor Inc. in 1986 and BinLab Inc. in 1997.

He has received numerous scholarships and awards including the prestigious Vidya Jyothi award from the Government of Sri Lanka given to exceptional achievements in science, in 2017, “Global Citizen” award from the United Nations Association in 2017, Lifetime Achievement award from the President of Sri Lanka in 2016, Fulbright scholarship in 1974 to read for his doctorate at the University of Southern California, the “IBM Fellow” award, given by the IBM Corporation to outstanding doctoral candidates in US universities, the TALARGI scholarship given to post-graduate students in polymer science at the University of Southern California and the Indian Cultural scholarship to study engineering at Jadavpur University, Calcutta, India.

In addition, he was nominated and received the Outstanding Business Professional of the year award in 1999 given by the South Asian Chamber of Commerce of Houston, and was nominated by Merrill Lynch for Entrepreneur of the of the year in 1995 and he also received the Lifetime Achievement Award from the Sri Lanka Foundation, an award given to prominent Scientists of Sri Lankan origin in 2004. In August of 2017, he was appointed as Honorary Professor of Clinical Medicine by the Kotalawela Defense University.

Dr. and Mrs. Wijay live in the suburbs of Houston, Texas USA.