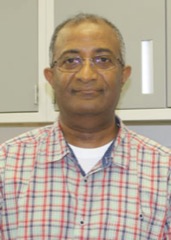 The world population is expected to increase from the current seven billion to more than nine billion in 2050. Plant scientists are researching methods to increase the yield of major crops such as wheat, corn, and rice to feed the growing population in the coming decades. The challenge to feed a growing population is not new to plant scientists. For example, the world population increased from two billion in the 1920s to four billion in the 1970s. Plant scientists were able to avoid a food shortage catastrophe during the 1960s by developing semi-dwarf high yielding wheat and rice varieties and distributing the seeds to farmers, an era known as the green revolution. The semi-dwarf shoot architecture of green revolution varieties was developed through trial and error, with little knowledge of plant physiology, growth, and development. The green revolution approach had reached its limit, and thus, the yield per unit area of the major crops did not increase since the 1980s. Now, it is expected that research on molecular pathways and gene regulatory networks controlling plant growth and development will lead to the next breakthrough in plant sciences, referred to as the gene revolution, to increase the yield of major crops and feed the ten billion people by 2050. In this seminar, I will present a brief history of the green revolution and its limits. And then I will present my research that demonstrates the power of plant computational systems biology approaches to identify molecular pathways and genes that can be deployed to increase crop yields by manipulating plant shoot architecture.

Dr. Tesfamichael Kebrom is a research scientist at the Center for Computational Systems Biology (College of Engineering) and the Cooperative Agricultural Research Center (College of Agriculture and Human Sciences). He received Ph.D. in Molecular & Environmental Plant Sciences from Texas A&M University, and Postdoctoral training at the Boyce Thompson Institute for Plant Research at Cornell University and the Commonwealth Scientific and Industrial Research Organization (national lab) in Canberra, Australia. His research focus has been on understanding the physiological and molecular bases of plant shoot architecture and its regulation by molecular and environmental mechanisms. His current research focus at PVAMU is to identify molecular pathways and gene regulatory networks controlling plant growth and development using plant computational systems biology approaches to improve crop yield and adapt crops to adverse environments.