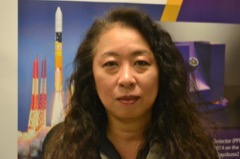 Long duration space flight in deep space is becoming a closer reality. Radiation in deep space is the most significant health concern. The space environment consists of varying field of radiation particles including high-energy protons, high charge and energy (HZE) nuclei, as well as secondary particles that are generated when the primary particles penetrate the spacecraft shielding. High-LET heavy ions are particularly effective in causing various biological effects, including cell inactivation, genetic mutations, cataracts and cancer induction. Most of these biological endpoints are closely related to chromosomal damage, which can be utilized as a biomarker for radiation insults. Over the years, we have studied chromosomal damage in human fibroblast, epithelial, and lymphocyte cells exposed in vitro to energetic charged particles generated at several international accelerator facilities. We have also studied chromosome aberrations in astronaut’s peripheral blood lymphocytes before and after space flight. Various fluorescence in situ hybridization techniques have been used to identify chromosome regions ranging from the telomere region to whole chromosome painting of all chromosomes simultaneously in one cell. I will summarize the results of the investigations and discuss the unique radiation signatures and biomarkers for space radiation exposure.

Dr. Megumi Hada is a Senior Research Scientist in the CRI / Radiation Institute for Science & Engineering. She has been worked Human Health Program at NASA before she moved to PVAMU 3 years ago. Her research interest is in effects of space radiation environment modeling and studying biological consequences on humans. Main focus of her research is how to protect astronauts from space radiation exposure by developing counter measures and risk assessment. Recently she has started study combined effects of microgravity and space radiation on human cells.