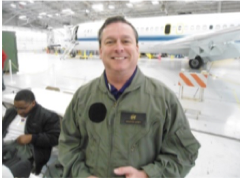 A complex and changing spectrum of galactic cosmic and solar particle radiation is present in space and also continually bombards the Earth’s upper atmosphere. Components of this cosmic radiation spectrum interact in different ways with the atmosphere producing secondary radiation. The measureable amount of radiation exposure caused by this primary and secondary radiation in the atmosphere increases with increasing altitude. In Low Earth Orbit (LEO) as well as at common commercial aircraft altitudes, the radiation dose received by astronauts, flight crew members or frequent flyer passengers can be significant from a radiation protection and safety standpoint. Awareness of this radiological safety issue by the aerospace scientific community, individuals associated with the air travel industry, as well as the general public has led to a host of studies over a period of decades which have been designed to measure, model and predict the radiological environment and risks posed during air and space travel. Presented in this seminar are results from flight dosimetry studies performed by researchers at the National Aeronautics and Space Administration (NASA) Center for Radiation Engineering and Science for Space Exploration (CRESSE) at Prairie View A&M University, Prairie View, Texas. Also presented are examples of how flight dosimetry results are integrated into both human radiation safety programs and cancer epidemiology studies.

Dr. Brad Gersey is considered an expert in micro-dosimetry and interacts with all major academic and governmental groups in the field of radiation research. He has taken micro-dosimetry measurements in radiation facilities all over the world, including the NASA Space Radiation Laboratory at Brookhaven National Laboratory, the Los Alamos Neutron Science Center at Los Alamos National Laboratory and the HiMAC facility at NIRS in Chiba, Japan. He has also conducted collaborative radiation dosimetry research aboard a multitude of flight platforms including the ER2, DC9, high altitude balloons, Virgin Galactic SpaceshipTwo, and the NASA Zero Gravity Plane (The Vomit Comet). He has included underrepresented STEM students in his research, including work at all these facilities and platforms. He also advised students performing micro-dosimetry experiments on the NASA “Vomit Comet” micro-gravity vehicle. The results obtained by the students were presented at an international conference on space dosimetry on the International Space Station.