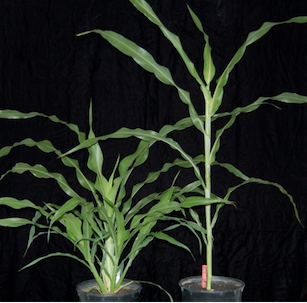 Project Summary: The funding award is to identify candidate genes that control shoot branching in plants. Shoot branching develop from buds and the number of branches and their position determine the final plant shoot architecture, a major factor that determines resource use efficiency and yield of agronomic and horticultural crops grown for food, feed, and biofuel feedstocks. Most crop species activate many buds to grow into branches. The branches compete for light and nutrients. Some of the branches die before reaching maturity and producing fruits or grains. Resource used by such unproductive branches is lost. In addition, the unproductive branches compete with the productive branches for light, water, and nutrients. The competition weakens the growth of the productive branches and reduce their yield. Farmers remove branches manually, known as pruning, to improve the resource use efficiency and yield of fruit crops. The labor cost for pruning could exceed 20% of the total cost of production, and thus reduces farm profitability. Most of the agronomic and horticultural crops that are grown for food, feed, and biofuel feedstocks cannot be pruned. The long-term goal of Dr. Kebrom’s research is advancing fundamental knowledge of the physiological and molecular basis and identify genes that control shoot branching. The objective of the funded project is to identify candidate shoot branching genes using molecular and genetic approaches. The genes will be useful to develop new crop types with the ideal plant shoot architecture that maximizes resource use and yield of agronomic and horticultural crops. These crop types will not need pruning, thus will enhance profitable crop production systems in US and ensure global food security. In particular, small-scale farmers with limited resources will benefit from growing crops that do not require pruning.

Dr. Kebrom is a Research Scientist with a joint appointment with the Cooperative Agricultural Research Center in the College of Agriculture and Human Sciences, and the CIR Center for Computational Systems Biology in the College of Engineering. He received Ph.D. In Molecular & Environmental Plant Science from Texas A&M University, and postdoctoral training from the Boyce Thompson Institute for Plant Science Research at Cornell University and the Commonwealth Scientific and Industrial Research Organization (CSIRO, a national lab) in Australia.

A team of researchers including Dr. Seungchan Kim (a computational Systems Biologist and Director of the CIR Center for Computational Systems Biology in the College of Engineering), Dr. Peter Ampim (Agronomist in The College of Agriculture and Human Sciences), and Dr. William Rooney (Regents Professor of Plant Breeding and Genetics at TAMU) will collaborate in this project to generate a large RNA sequencing (RNA-seq) and quantitative trait loci (QTL) data from model sorghum and maize plants that are suitable for identifying shoot branching genes.